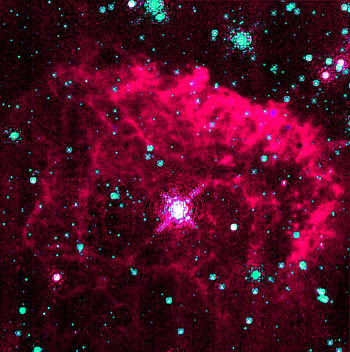 Even in the deepest dark - because your aim is true

“And-if-I-could only have one wish,
Darlin’ then it would be this
Love and Happiness ….For you”

Love and Happiness – and sunshine!

That’s what we all want no matter who, where, what, we are.

It’s cold and wintry in . A lot of people are feeling down. We haven’t had enough warm for it to get cold

I like many others I know around me have been feeling a bit glum this month. I don’t really know why. The aches and pains have improved. The tooth extraction has healed. The mortgage is covered this month and we are all relatively healthy, but the hole in the soul is there nevertheless and I am riding it and hoping it will go away soon. . Perhaps the wintry weather came too soon after a disappointing summer – the worst on record

The shock of returning to the cut and thrust of life after an idyllic two and half weeks in gentle and beautiful has something to do with it. The lack of a project or something to look forward to is another factor. Perhaps the change in my hormones is contributing. The fact that I am not grateful enough for everything I have is certain. I am also not “giving what I wish to receive” which is a most brilliant piece of wisdom. Trouble is I am not sure what I wish to receive. Anyway, I must allow the fallow field to mature and eventually put forth its fresh creation. In the meantime I can cheer myself with some love and happiness in my life recently. 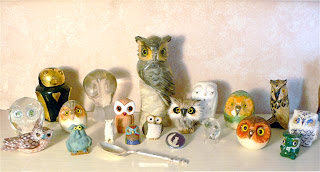 I want to introduce you to my Owls. I have been collecting owls for a few years now. Night birds with large eyes; fragile and strong, and supposedly wise. I feel an infinity with owls. My father used to call me his “little wise owl” when, at the ripe old age of 18, I sat up counselling him on the state of his marriage to my mother till the wee hours as he worked his way through yet another gin and tonic and Charlie, our budgerigar, ran down his arm to sip from the glass and stagger back up to his shoulder again!

There have been three newcomers this month. The Mosaic one on the left is from Aimi and Mass who found it in the Pollensa market in . The glass one on the right is from Mary Morris who brought it back from and the central wax candle owl is from Penny Tham who brought him back from . She says the hair style wick reminded her of my new hairstyle!!! They will be added to my growing collection of owls who bring a smile on a day like this.

Mia is approaching her teenage years at gathering speed!

Her new fun thing to do after school is to dress up in my clothes and wigs (never worn) and pretend to be a model.

by Mia and her friend Issy whilst trying to sort out my laptop. These two young ladies dressed up in my clothes are 8 year olds – heaven help us in a couple of year’s time!! 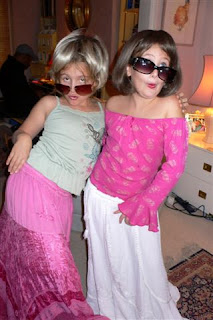 In spite of the grey clouds, some good things have happened this month which I am grateful for:

Kathryn Johnson at British Library has found “Ill Wind” the manuscript of the play my father wrote about his war years spent defending which was broadcast by the BBC in 1946 and toured with the “White Rose Players”. She will have it copied for me so that I can read it for the first time and let Arni, my recent Icelandic visitor have a copy.

John Cork, who makes all the pre film documentaries on the Bond films, has asked me for a picture of Dad for the new Special edition Casino Royale DVD due out in January. This will be the first time that Dad has been officially recognised by Eon. 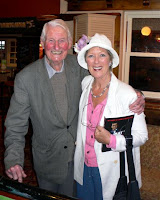 childhood Doctor Lytle now 87 years old out for lunch last week. It was wonderful to see him again after about 50 years. He was one of my life’s “Good Warriors” as the Native American Indians say, and we reminisced all afternoon about life in Oxshott in the 50’s and all the things that happened to my family and his, and others in the village. I have vivid memories of seeing him at his surgery where his beloved long haired Dachshund would always be lying by a cosy gas fire. John would prescribe medicine and advice along with a funny story or joke before one left always feeling better for seeing him. Or he would stride into the sickroom at home with his black Doctors bag and reassuring smile, sit on the bed and make you stick your tongue out and you knew everything was going to be alright. They don’t make them like that anymore – sadly they don’t seem to have enough time for 'Bedside Manner' nowadays .

After a good lunch at the Fairmile in Cobham I went back to his home for tea and he asked me to select a book from his bookcase to keep. I chose “The Moon is a Balloon” by David Niven which I have read in the past but don’t have a copy of, and I gave him "The Battle for Bond". 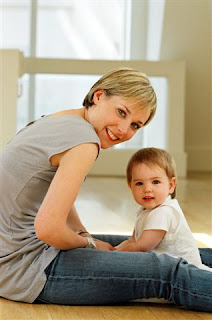 On Thursday I spent the afternoon with Caroline Hollinrake choosing pictures of her and her little Arabella. Gave her a for Bond book to give to her boss Eamonn Holmes as he is a Bond fanatic and received a sweet note and two of his books and a signed note back the next day. Have started his biography and am enjoying it immensely. He is a fellow Sagittarian and I recognise his Jupiter personality and jovial good humour.

On Monday 24th Robert Sellers who wrote for Bond and Graham Rye – 007 Forever magazine editor came over and took me out for supper and we had a fun evening telling Bond anecdotes till the early hours.

I went to a lunch held for the Rainbow Trust - a wonderful charity for children who are terminally ill, and had the great pleasure of meeting Julie Harris – costume designer extraordinaire – now a very glamorous 83 year old. Julie designed costumes for the first Casino Royale with Peter Sellers and for the first Roger Moore Bond “Live and Let Die”. She has also dressed dozens of other very well known films and won the Oscar for 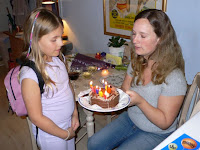 And my darling Aimi had an ah-ha hem birthday!!!

Now Christmas is hurtling towards us once more. Aimi
has booked us all to go and see the Wintershall Nativity again and we are busy deciding

whose house to be in for Christmas Dinner.