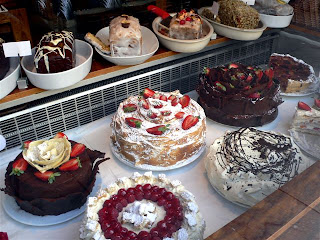 Its time for a celebration!

I had my last (if the Great Spirit of the Universe decrees) treatment of Herceptin, the wonder Cancer preventative drug, today.

I took the angels (nurses) a box of my favourite Lindt chocolates to say thank you, and was late as usual, and, as usual nobody minded or said anythin

The needle went in sweet as a nut and the infusion proceeded effortlessly. For the last time, hopefully, I gave my name and date of birth, and the nurse read out the name of the drug, quantity to be given and today's date, as a safety check before getting on with it.

I took my last Ham sandwich and apple juice plus 2 cups of tea from Esther, the rather grumpy tea lady, who I have finally coaxed a smile out of, and sat back like an old pro for the hour and a half process.

The yellow room was cheerful and bubbling with goodness and I acknowledged a few buddies I have made along the way with a smile and a nod.

They say there are no coincidences, and I found myself sitting next to a young woman with a fairly apprehensive expression who was on Day One of FEC chemo - same as I had last year. I was able to keep her talking as the first canula was inserted (it took two go's - my first took 4 goes!) and reassure her that the whole process would not be as bad as she might fear.

Later I sent her by email, my chapter on the first chemo cycle and the one where the hair starts to go so that she can know what to expect, and we exchanged phone numbers in case she needs some support.

Having been signed off and told I don't have to return for 3 months when I am due for a check up, I said goodbye to the Royal Marsden and its angels, and 19 months after the "big shock" I stepped quietly out of the building into the Spring sunshine with a light step and caught a number 414 bus back to Fulham to collect Mia and her friend Isadora from school.

We sat on the blue bench and played with the guinea pigs till it was time to go to Aimi's for supper. 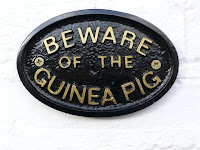 Highlights of the month include:

The gift of a bar of Russian chocolate from Oxana who came to stay at the Boot Inn at the beginning of the month. The manufacturers over there are trying to get away from all the garish colours of modern life and go back to the old style wrappers. Very 'tasteful' - and delicious! 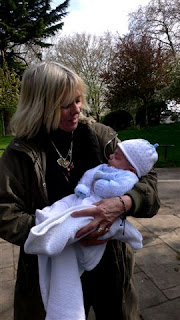 A walk in Bishop's Park with Sue, Chilli Pepper the dog and her adorable little grandson Archie who was born 11 weeks early weighing just over 2 lbs but has struggled hard to survive and is now a healthy 10 pound bouncing baby boy. The little hat I found him in Frog Orange in Headington has been a great hit!

A trip with Mia along the wobbly bridge over the
Thames to Tate Modern. It was my first visit there. I am not a modern art connisseur - in fact I just don't get it - nor do I really want to but it was time to at least have a look. I was not disappointed. At least 95% of the "artworks" such as arms coming out of the wall or the pile of bricks left 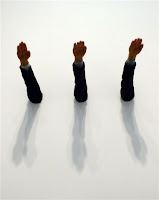 me cold and insulted my intellligence. I'm sorry, but a black painting in a black

frame - Art? Do me a favour! However one or two pieces were worth seeing. The huge canvasses of reflections in a river were quite beautiful, The giant Mona Lisa with moustache and beard made me chuckle, and Mia enjoyed some of the interactive games. We treated ourselves to a taxi home to the Boot Inn for a cuppa and then sat down to make our own Art from the clay pack bough

t in the gallery shop. Well at least I don't have to explain what they are!!!

Tea with Auntie Amy whose 100th birthday is fast approaching.
Seen here watching her favourite programme You are the Weakest Link with Ann Robinson!!!!

And an exciting visit from Bond collector extraordinaire, James Pickard and his friend James Lay who treated Robert Sellers, Christopher a

nd I to a slap up meal at our local Thai Restaurant. "No one goes hungry when eating with me" boomed James as he ordered practically the whole menu. James Pickard has the largest collection of 007 memoribilia in the world. He has a first edition of every Fleming book - signed by Ian Fleming himself and an Aladins cave of original poster and film artwork, photographs and so on. Robert and I have been invited to view his collection in Leicester soon. He had come to London to ask us to sign some of the Battle for Bond books which he has snapped up as he is also a "fine and rare books" seller and I signed 27 of them for him. 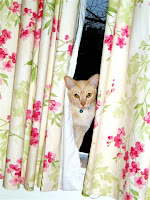 Tom, Aimi's beautiful burmese pussycat came to stay with me for two weeks while the kitchen is being made over.

Mia has taken a very fine portrait of him (left) with her digital camera which I have
framed and put on the wall! And mine is the one on the right. 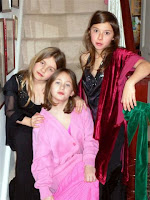 I also took this one of (l to r) Mia, Isadora and Nina, the nine going on 19 year olds dressed up in my clothes, and extreme foreseeable future trouble!!!!

But for now Its great to be well! It's great to have finished treatment. It's great to be alive! It's wonderful to be a part of this troubled old world where so many are struggling to make a difference and to contribute what they can.

I've been on the receiving end of a lot of love of love during the past year and a half. It's time to put some back. Thanks for listening. I do hope something I've said has been helpful and I wish you joy and courage in your journey through the Cancer Card, and remember, as my old dearly departed friend Mark McCormack said once in his Success Secrets newsletter "The Rough is only Mental"!

ALL Shall be Well.
Posted by Sylvan at 12:48 AM No comments: