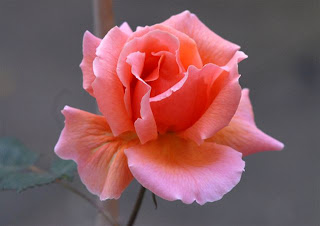 May is still my favorite month, and this May sees the end (finger's crossed) of my Cancer treatment for the foreseeable future.

I started out on this journey in May 2006, when London leaf and bud were preparing with me, for my darling daughter Aimi's marriage, little knowing what lay ahead in the months to come after the wedding celebrations were over.

24 months later, I am now free of all treatment and, as far as anyone knows, free of Cancer, thanks to early detection and the wonderful care and treatment I have received.

I am at the other end of the tunnel with a new crop of wavy hair. I have survived!

And so it is time to end this blog else it will drift into being just a chatty diary which was not it's purpose.

It was time to end it a month ago but I have procrastinated and dragged my feet towards this inevitable parting. It has been really hard to sit down and close this chapter in my life. A psychiatrist that I consulted for six sessions prior to my marriage in the early seventies due to a pair of very cold feet (they knew what lay ahead!!!) once said two very wise things to me that I have held on to for life. 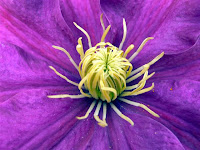 The first thing he said was that my relationship in my forthcoming marriage would be no better and no worse after marriage than it was at that precise time. He was absolutely right, of course, and my hopes that things would get better with a ring on my finger proved not to be so.

The second amazing insight he gave me after a relatively short, getting-to-know-me, period was "Why are you so afraid to lose the thing you love"?

I have never found a satisfactory answer to that question, and it's origin must lie in childhood somewhere, but, in spite of all the work I have done on myself over the years, the fear is still alive and kicking today. If I love something or someone, that love is almost always intertwined with the terror of imminent loss and/or abandonment. 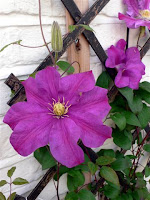 With any loss, whether person, place or thing, there is the inevitable empty space to be experienced before new growth replaces it, and so with a fairly heavy heart it's time to say goodbye and face the void bravely and with many, many thank yous to be expressed.

We Do Belong!
I received a small royalty cheque this morning, for mechanical sales of my little song "We Don't Belong" - now viewable on You Tube and available on itunes!! (sorry about the plug!)

This fairly obscure disc which I recorded in 1965 has been re-discovered and re-released on two compilation cds, recently, one of which was nominated for two Grammy Awards this February (best historical and best packaging!) and is still staggering on saleswise!!

In order to achieve any of the meager success this little song has earned, I needed the help of a 70 piece live orchestra to accompany me all those years ago at Lansdowne Recording Studios, Notting Hill.

In order to get through early stage breast cancer, surgery, chemotherapy and other treatments, I have needed another 70 piece live orchestra which has been made up of my family and friends who have stood by me with love, support, encouragement, presents and practical help to see me safely through this passage.

On piano, my wonderful daughter Aimi who was gifted to me staight from heaven. For her huge and constant range of always being there; for quietly fetching me, after her work, in my dressing gown and taking me back to hers for supper on the bad days, for standing on the steps at the Marsden with tears matching mine in her eyes when we were told I had to have chemo, and for being the best daughter anyone could ever hope to be lucky enough to have - Thank you darling!

On drums, cousin Christopher, for providing a steady and continuous beat of practical helpfulness, cheerfulness and encouragement (as did cousin Irene) and for all the cups of tea and chats on my bed in the morning that kept me going. - Thank you Chris!

My son in law Massimo on bass, who held it all together on the occasions when I just had to work. For carrying equipment that I was too tired to manage and changing rolls of film when my fingers were too creaky to do it and for ferrying me about - Thank you Mass!

To my darling granddaughter Mia, on triangle, for providing the light entertainment and the joy of her company after school and at weekends. Thank you darling Mia! 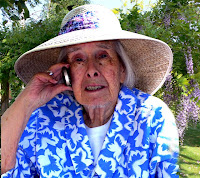 And last, but certainly not least, my ever-young musical director, Russell Herring who put a song in my heart, and wielded his magic baton throughout the symphony with some unforgettable solos on the French Horn. - Don't ask!!!! 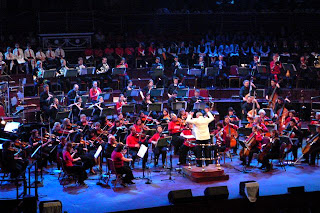 I shall now step down as Priniciple Artist and take my place again in the Great Orchestra of life as we all roll along to the music and to our ultimate and unavoidable Destination together.

If I have helped anyone who has been dealt the Cancer Card through the sharing of my experience it has been well worth it and that makes me feel good.

We DO Belong!!! We belong to each other

and - All Shall Be Well.

we are so happy for you and your family.it has been a long journey,
which you handled with dignity and
class. you were an inspiration to us all.i'm sure the blog was helpful
to you, but it was a wonderful experience for all of as well..and
what a terrific writer you are!!
lots of love
cam,kate & "the girls"

What an incredible & positive blog you wrote, it has taken me the best part of 2 days to read it! but it is so well written with such informative messages for anyone going through the whole treatment. I had no idea of what it is all about, as no one really talks about their experiences, but your blog will be so helpful to so many people out there.
I think you have a new future in writing! you have written music & lyrics, so why not books?
You have been through so much & have been incredibly brave & positive, I am sure I would have curled up & hibernated. I am sure your positive outlook has been helpful to your recovery, your family must be so proud of you. I am sure that will be the end of it all now & you can look forward to a happy future.
Loads of love & hope to see you very soon. Boydie

we are so happy for you and your family.it has been a long journey,
which you handled with dignity and
class. you were an inspiration to us all.i'm sure the blog was helpful
to you, but it was a wonderful experience for all of as well..and
what a terrific writer you are!!
lots of love
cam,kate & "the girls"

I found this site using [url=http://google.com]google.com[/url] And i want to thank you for your work. You have done really very good site. Great work, great site! Thank you!

Good post and this fill someone in on helped me alot in my college assignement. Thank you as your information.

Fitness has many benefits specifically related to cancer. Research has shown that regular exercise reduces your risk of developing colon and breast cancer. Although everyone should exercise daily, if you have a family history of breast or colon cancer fitness is even more critical.

However, exercise is not only beneficial to prevent cancer. It can also be useful for patients that have already been diagnosed. Physical activity after a diagnosis can affect quality of life and survival rates. Fitness helps reduce fatigue in patients that have a cancer diagnosis. Research seems to support these theories. One study found that women who exercised moderately after a breast cancer diagnosis had improved survival rates than sedentary women. A study on colon cancer produces similar results.

Exercise can also help prevent the cancer from returning once in remission. An observational study on colon cancer found that subjects with higher levels of physical activity after diagnosis were less likely to have a cancer recurrence.

Fitness is important for mental and emotional health, especially in cancer patients. Exercise causes an increase in endorphin in your brain, which can improve your mood. This is very important in patients with a severe diagnosis, such as mesothelioma. Although exercise may not cure the patient, it will improve the quality of life and mental health.

Although your doctor may forget to mention the importance of exercise, it doesn't mean it should be forgotten. The rest of your treatment is important but exercise is a critical part. Consult your physician before you start an exercise program. For most people diagnosed with cancer, exercise is healthy and recommended. However, your exact treatment plan depends on your symptoms and diagnosis.

With thanks to David Haas for this article

Saved as a favorite, I really like your site!

Howdy! This blog post could not be written any better!
Looking at this post reminds me of my previous roommate!
He constantly kept talking about this. I will forward this article to him.
Pretty sure he'll have a good read. Thank you for sharing!

I pay a quick visit everyday a few sites and sites to read articles,
but this blog gives quality based content.

Review my homepage: at nubiles vally

I absolutelү love your website.. Excellent colors
& theme. Did you make this web site yourself? Please reply back as I'm attempting
to create my own personal website and wnt to find οut where ƴou got thiѕ from
or just what thhe theme is callеɗ. Many thanks!