The Sorrows of my Heart 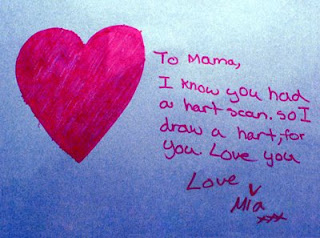 I would not exchange the sorrows of my heart for the joys of the multitude. And I would not have the tears that sadness make to flow from my every part turn into laughter. I would that my life remain a tear and a smile..... A tear to unite me with those of broken heart: a smile to be a sign of my joy in existence.
- Kahlil Gibran, Tear and a Smile
I'm nearing the end of my treatment!! (Fingers crossed) I have two more Herceptin appointments over the next month and then I am done.

This week I had a final, very thorough Heart investigation to make sure that the heart muscle has not been damaged by the treatment I have been having. 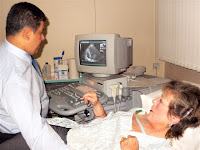 Mary sat with me at the Marsden whilst I was examined by Consultant Cardiologist George Amin from Queen's Hospital, Romford. George made us laugh because he said he was an "Essex Boy"!!!! I mean, Amin?!!!!! Actually I drove him mad with my chatter and jokes and he had to keep telling me to be still so he could get a complicated reading from his ma 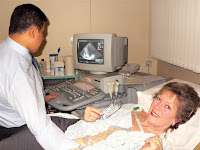 chine. I was able to watch the whole process. Fascinating to see my heart pumping away and the little valves going to and fro. Every so often he would click on a dark area and take a photo of it which made me slightly nervous and I would say silly things like "Is that a lump you see on my heart?" But he patiently explained that he was not looking for lumps but merely there to measure the function of the left ventricle to make sure all was well as Herceptin could cause problems.

I did feel a bit nervous because the ultrasound room was the very one I had lain in in all innocence, 18 months ago now, when the nice nurse took my hand and gave me "that look", and the rather fiece femail Cardiologist told me that my mammogram and ultrasound scans were 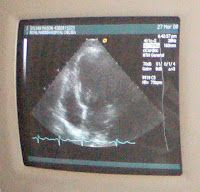 "abnormal" and the first icy fingers of fear gripped that same heart, now pumping away so merrily on the screen, as I said "It's not cancer though is it?" and an hour later was advised that it indeed was cancer and that I would be having a masectomy in the next two weeks.

This time, thankfully, all was well. My poor old heart which doesn't look at all battered by the slings and arrows of life, on the sceen and shows none of it's scars, has been pronounced "normal" and functioning as it should.

Mary (who took these rather glam photos) and I celebrated with a Decaf Cappuccino at the Crown Pub opposite afterwards. 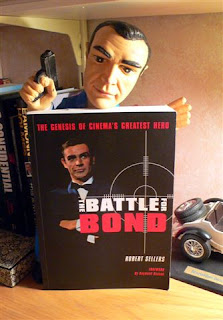 ement in the film version of Ian Fleming's books has caused a few skipped beats this month. Bruce Sachs of Tommahawk, the publisher has opted to hand back the remaining 300 books that were in the warehouse rather than oppose the Ian Fleming Will Trust lawyers in a battle as to whether or not we had the right to publish a couple of letters from Fleming to my father that had been part of the 1963 law case and therefore in the public domain as far as we were con

cerned. It has caused no problems in USA where the books are now selling out fast.

This has resulted in some very welcome publicity and the rush to bring out the new edition of the book which will not include the letters as illustrations (though we are allowed to reveal the content) which were not necessary to the plot anyway - merely of interest, we thought, for the reader to see. the new edition which is now eagerly awaited by thousands of Bond fans will be a sligthly smaller and less expensive version of the original lovingly put together book which was a little expensive but will be treasured by the collectors.

Sean Stowell of BBC Yorkshire interviewed Robert, Bruce and myself for the clip below. It would have been an even longer clip if Barnsley had not just beaten Chelsea a couple of hours before the broadcast so that the rest of the news was filled with Barnsley football fans celebrating in various pubs and states of sobriety. 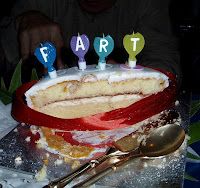 Highlights of a rather musical month have been Christopher's birthday celebrated as usual at the Blue Elephant Tai Restaurant, Fulham Broadway with a cake supplied by Aimi that original said 'Party' on it - redesigned by Mia and me!!

Maureen's Songs from the Shows concert at the Chelsea Arts Club 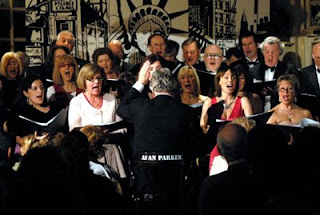 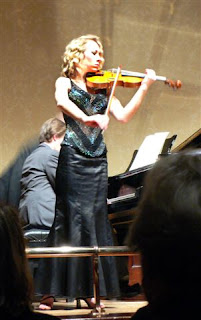 Dunya Lavrova represented the Royal College of Music where

she is now studying for a PHD having gained honours in her final exams last year , and played some amazingly complicated pieces brilliantly and with charisma at the Wigmore Hall on Monday 24th March. She has grown both as an artist and in composure since I last saw her over a year ago. 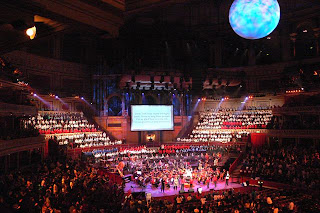 And last but not least Mia's Schools choirs Proms Praise for Schools" Concert at the Albert Hall, which I dutifully went along with the family to see - not expecting a wild evening.
See "Mia at Albert Hall" on You Tube.


However a grand surprise awaited us as we took our seats in the ground floor box which due to the generosity of the evenings sponsors cost a meagre £5 per head, having collected drinks for the interval . 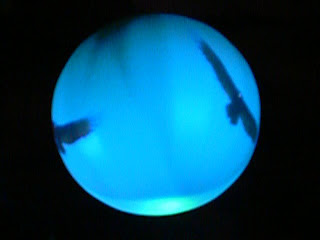 ction was spectacular with the orchestra and 12 school choirs on stage lit beautifully with multi-coloured lights. A huge ball was suspended from the domed ceiling on which was projected scenes such as eagles in flight to accompany "Up Where We Belong" and film footage depicting Fire and Flood to highlight the Elements - which was the theme for the night. Sprays of fireworks dashed round the Grand Circle and the evening ended with a gigantic glitter ball which obliterated everything from view in a shower of golden tinsel. 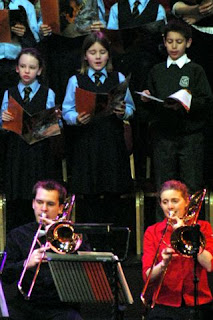 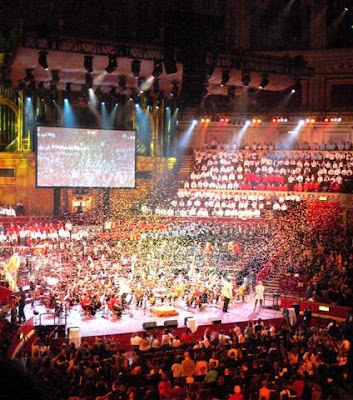 As I said to Russell later on, it warmed the cockles of my heart no end!!!!